CHALLENGE:
The Polynesian Voyaging Society’s Mālama Honua Worldwide Voyage (WWV) was a journey of traditional voyaging canoes across Earth’s oceans to join and grow the global movement toward a more sustainable world. The voyage was a complex endeavor that required a sophisticated suite of communication strategies and tactical approaches during the legendary Hawaiian voyaging canoe Hōkūleʻa’s various ports of call both at home in Hawai‘i, nationally, and internationally.

On Saturday, June 17, Hōkūle‘a and its crew members made their historic return to Hawai‘i at O‘ahu’s Magic Island after sailing more than 40,000 nautical miles since departing O‘ahu for the first deep sea leg of the voyage in May 2014. Hōkūle‘a sailed into Magic Island along with a fleet of seven deep sea voyaging canoes from Hawai‘i, Tahiti and New Zealand. The homecoming celebration, themed Lei Ka‘apuni Honua, meaning “A Lei Around The World,” honored the journey of connecting cultures around the world. The homecoming event drew thousands of people in person and millions of viewers globally.

STRATEGY:
• Prepared a media list of all outlets engaged internationally during the three-year voyage.
• Strategically planned extensive coordination with partner organizations.
• Coordinated logistics and PIOs with the City, Department of Land and Natural Resources, State Department of Transportation–Harbors Division, Coast Guard.
• Honolulu Police Department and the Department of Parks.
• Arranged for pro bono access to a media escort boat from Navatek specifically designed for on-deck stability for high-value broadcast media and photographers.
• Prepared a holding statement to guard against media exposure if canoe sighted from land before the ceremony was set to begin.
• Accepted volunteer support of PR industry leaders from other agencies and organizations, all eager to contribute pro-bono in order to support the historic effort.
• Prepared an in-depth staff briefing book to equip all PR team members to answer questions.
• Built out and staffed a media tent with resources for reporters to sit and file stories in real time. 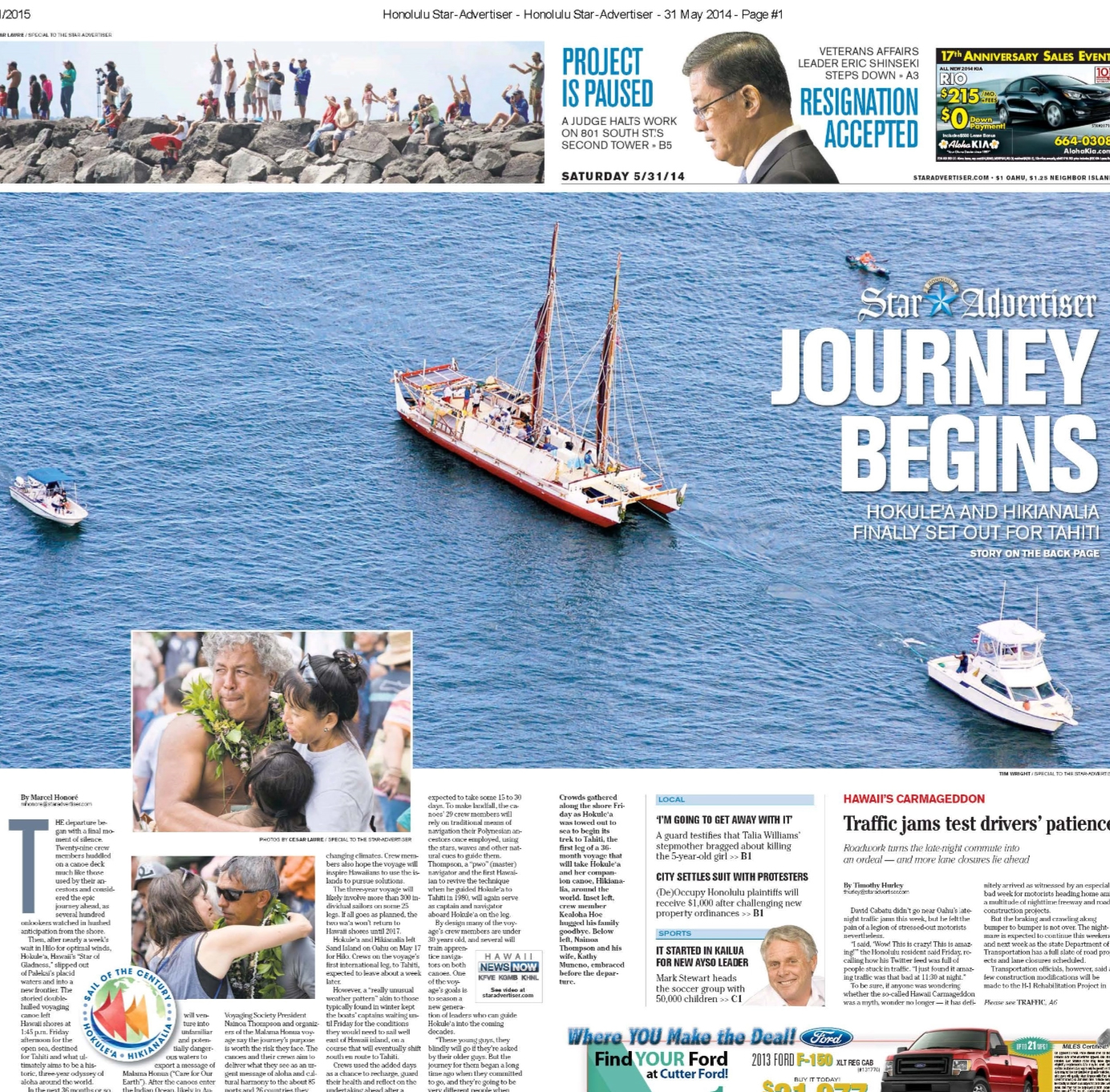 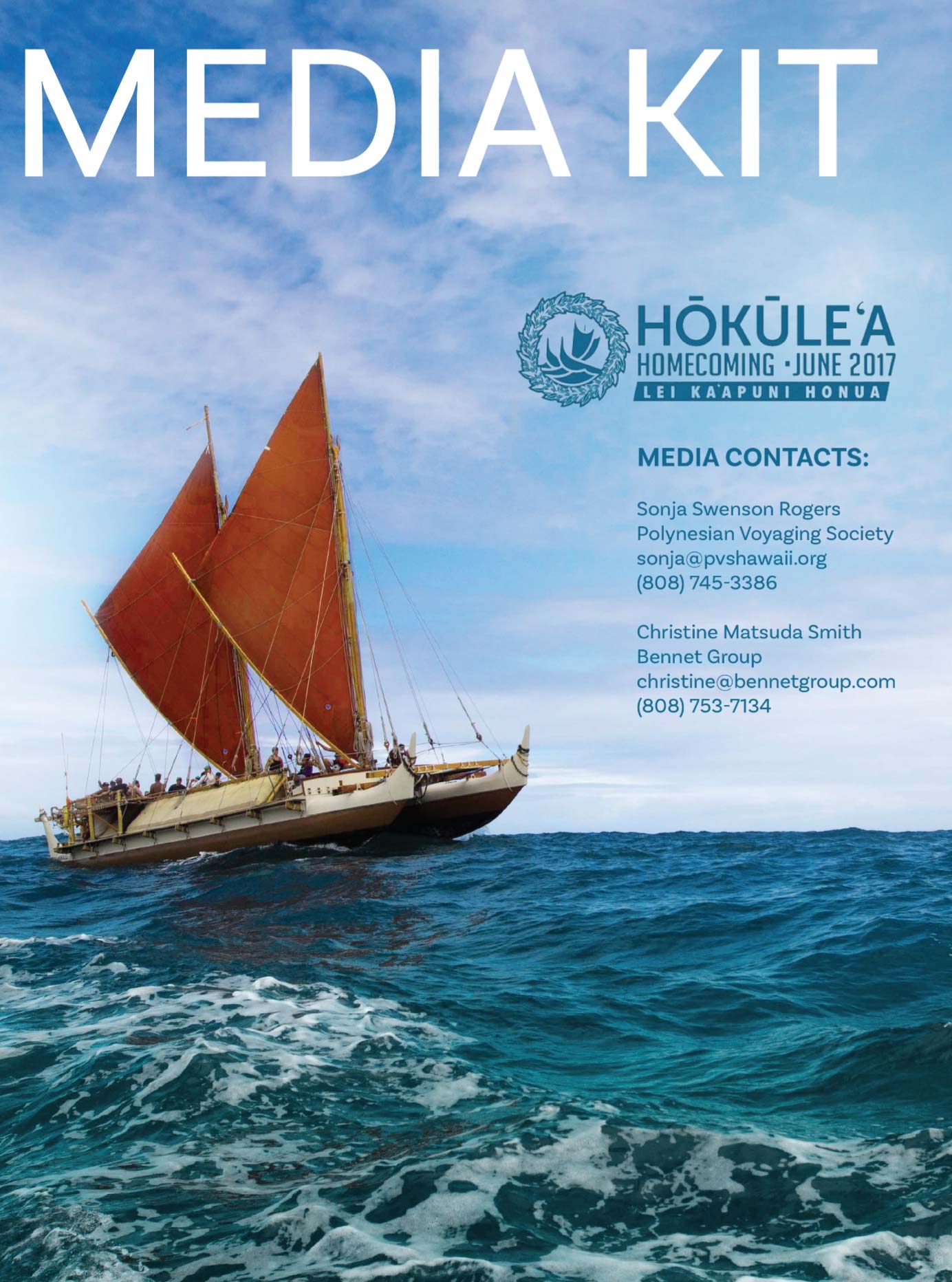 RESULTS:
• Nearly 3,000 media hits, including the extensive pickup of wire stories from the Associated Press, Reuters and the British Broadcasting Corporation, with a total reach of 1.7 billion.
• Hawai‘i’s premier statewide daily newspaper, the Honolulu Star-Advertiser, ran a 28-page special edition insert wrapping the front cover.
• Notable pieces included live remotes with British Broadcasting Corporation News, print coverage in the Boston Globe filed on-site by a reporter who travelled to Honolulu for the event, an in-depth segment on NBC Nightly News produced by a crew flown out specifically for an exclusive media sail aboard Hōkūle‘a and a thoughtful feature in the L.A. Times.
• Scott Humber, news director at the state’s largest station Hawaii News Now, reported that the June 17 Homecoming event garnered the largest audience of any event in the station’s history.
• The combined audience from social media and local broadcast stations was 6.45 million.
• The total number of comments and shares was 64,720 across social platforms.
• Hokulea.com enjoyed more than double its average number of sessions, reaching over 87,587.
• Polling indicated that one of the top three points of pride for ‘Oahu residents in 2017 was the Mālama Honua worldwide voyage, including our leadership in the movement for a more sustainable Island Earth.